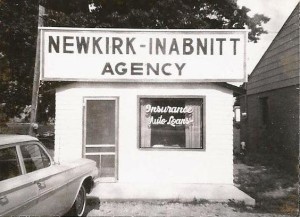 The Inabnitt’s started in the insurance industry in 1962, when Carlis “Toddy” Inabnitt went to work for Farm Bureau. His territory was northern Johnson County.

In 1965, he joined Glen Newkirk to form Newkirk-Inabnitt Agency. Their office was in Bargersville. At that time they signed on with Motorists Mutual Ins. Co. which is still one of the main companies in the office.

They added Real Estate to the business as well in 1967. This continued until 1970 when the two agencies where split with Inabnitt Agency moving to Greenwood. Newkirk Agency eventually moved to Franklin.

After being with the company for 31 years Toddy retired in 1995 to enjoy golfing, part-time in Indiana and Florida.

Marvin “Pookie” Inabnitt was with the agency from 1982 until his passing in 2020.

Our Current team, which is devoted to continuing the family atmosphere and personal service that was started by Toddy are:

Bill Inabnitt started in 1984 as the office manager. During the next year Bill received both his Insurance & Real Estate licenses in 1985 and continued his schooling.

Pat Rather joined the agency in June 2015 as the Office Manager and earner her insurance license in 2016.

Jeremy Cracraft returned to the agency in 2022 after renewing his Real Estate license and earning his insurance license.